This script is a very flexible solution to every designer’s worst problem: catching all local overrides and converting them to character styles.

This script works with InDesign CS4 and upwards, on Mac or PC.

To download a demo, click here. To purchase this script using click on the “Buy now” button. You will be taken to Paypal, where you can make the purchase using your credit card or Paypal account. 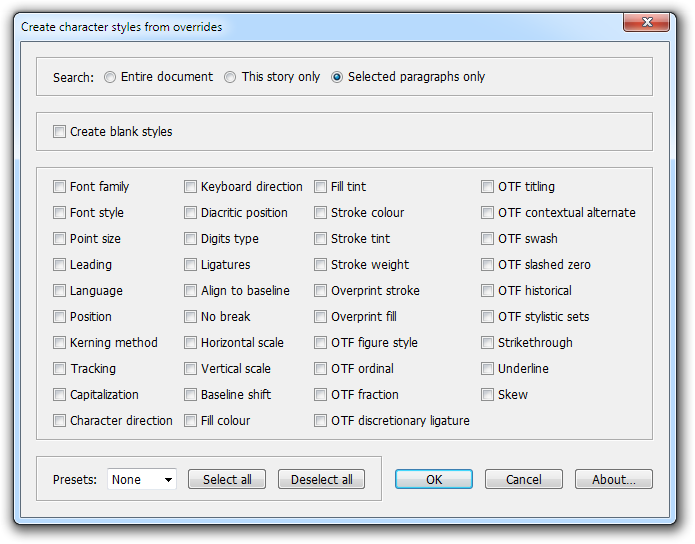 So for instance, if we’re only interested in catching variations of bold, italic, semibold etc., as well as say any underlining, one would deselect everything by clicking on “Deselect All”, and then selecting the “Font style” option at the top of the first column, and the “Underline” option at the bottom of the last column.

The Create Character Styles script searches all text in the document, including tables and footnotes.

Below is a screenshot of the character-styles panel after running the script on a 128-page publication: 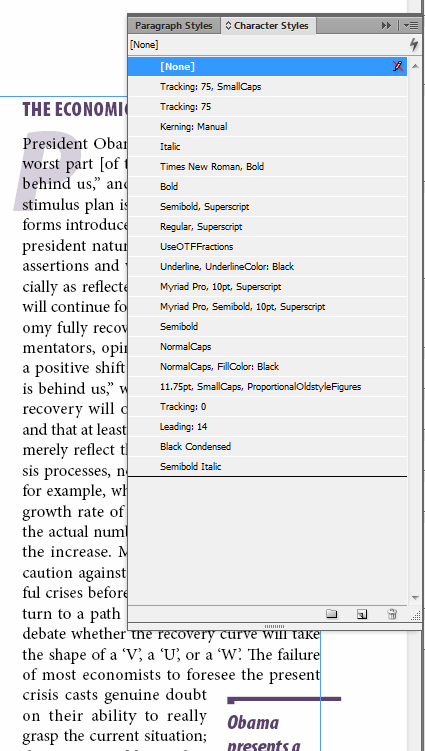 A single license for this script is available at $39.00 USD. For multiple licenses, please contact us to arrange a discount.

The terms of the license permit the installation of the script on a single user’s computer. The script is copyright. It is illegal to make unauthorised copies of the script.

For just $39.00, this script is an amazing timesaver for anyone working on long documents in InDesign.

To download a demo, click here. The demo runs exactly like the full version of the script, with the limitation that it may only be run 3 times in demo mode.

To buy the unlimited version for $39.00, click on the “Buy Now” button below and you will be taken to PayPal to complete the transaction, or send us an email admin@FreelanceBookDesign.com. You will normally received your script within one working day (if not before).